The Journey to Bethlehem: Some Facts to Know 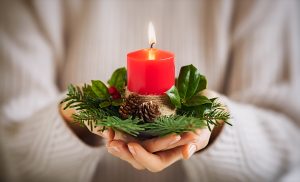 In the second week of Advent, we light the candle of faith or “Bethlehem Candle.” Its namesake represents Joseph and Mary’s journey to Joseph’s hometown.

We learn of this journey in Luke 2:1–7. Mary and Joseph must travel to Bethlehem from Nazareth at that time, which takes at least four to five days. Some time in their journey, Mary gave birth to Jesus.

Why did they have to travel to Bethlehem?

In those days, Caesar Augustus had issued a decree that every citizen in the Roman world should have a census. A census is a document necessary for a person to pay taxes. Joseph, a descendant of King David, must go back to his hometown in Bethlehem to register. Mary, who is heavily pregnant, goes with him on this journey.

What happened during their time in Bethlehem?

Since Bethlehem is relatively far from Nazareth, it took the couple a few days to finally arrive. Once they arrived, they found that several inns were full and had no available lodging. Seeking shelter, the two finally found a stable where Mary gave birth.

After giving birth, Mary wrapped her son in cloth and placed him in a manger.

What happened after Jesus was born?

A few shepherds were living out in the fields nearby. While they were watching their flocks at night, an angel suddenly appeared and alerted them of the good news. Joyous, the shepherds went to the stable, where they found the Messiah lying in the manger. After seeing him, the shepherds alerted many people.

What did the three wise men give to Christ?

Many people visited the newly born Messiah. Three wise men from the east went to the manger with a guiding star and presented Jesus with three gifts. Gold, frankincense, and myrrh. Each of these gifts has a special meaning.

What are the meanings of the gifts?

The three gifts have a spiritual meaning. Gold represents kingship on earth. Since Christ was prophesized as “King of the Jews,” it’s only fitting that he receives gold.

Frankincense, on the other hand, is an incense or aromatic used for worship. Jesus, the son of God, is prophesized as the world’s savior. As such, presenting him with frankincense acknowledges his divine goal.

Myrrh, an embalming oil, is a symbol of death. While it may be shocking for some, we learn later on that Christ must die so we can have eternal life. Myrrh represents the suffering he must take to cleanse us from our sins.

While the story is brief, it offers much insight into Christ’s future. As you can see, his birth is special because he is the son of God. However, because of this, he must also undergo suffering in the future.

While we soon realize that Jesus has risen from the dead, we must also remember that his Second Coming will bring glory to us all.

– by Diane Davies, author, Life in the Neck: Advent of Christmas

View Featured Articles
minerva garcia
Amy Tan
Lessons of Success from E.L. James
Allahkaluzhny
Great Changes Require Great Sacrifice: My Daddy, Dr. Martin Luther King, Jr.
Back to Panem: The Ballad of Songbirds and Snakes
BookTok: A Trend to Watch Out For in 2023
Wealthiest Authors of 2022
In Memoriam: Some Literary Deaths of 2022
The Ratzinger Report: An In-Depth Interview of the Future Pope
Previous
Next