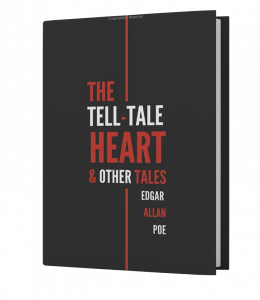 Edgar Allan Poe’s works have continued to thrill and entice readers for years. Numerous radio, TV, and film adaptations have brought his works to life, which depict the macabre and the mysterious.

The Tell-Tale Heart & Other Tales has compiled an easy-to-read version of Poe’s eight most beloved stories. Here are a few of the best short stories by Edgar Allan Poe to read this Halloween:

The story relays on an unreliable narrator’s recollection of the murder he committed. Throughout the story, the narrator struggles to convince the reader of his sanity and explains why he committed the murder. The victim of the murder was an old man with a pale blue eye that was “vulture-like.” As the eye continues to haunt the narrator, he begins to execute a perfect murder which results in him dismembering the older man’s body before concealing it underneath the floorboards.

The older man’s dying screams during the night result in a neighbor reporting to the police. As the narrator invites the police to the home to investigate, he begins to feel uncomfortable and notices a ringing in their ears. Each second, the rings grew louder and louder, convincing the narrator that the sound was coming from the older man’s heartbeat underneath the floorboards.

Despite the police not hearing the sounds, the narrator eventually breaks down and confesses his crime. The narrator then tells them to tear up the floorboards to find the remains of the victim’s body.

The story focuses on Prince Prospero’s attempts to avoid a deathly plague known as the “Red Death.” The prince and a thousand other nobles took refuge in the walled abbey to escape the plague as numerous victims succumbed to its symptoms.

Some symptoms include sharp pains, sudden dizziness, and profusely bleeding at the pores before reaching their inevitable death. The prince and the nobles are indifferent to the sufferings of the poor and intend to wait for the plague to die out as they seal their doors shut to outsiders. Eventually, a mysterious figure enters the abbey’s festivities—mystifying the prince and his guests with its disturbing appearance.

Set in the Spanish Inquisition, “The Pit and the Pendulum” is a classic horror tale because of Poe’s physical depictions of fear. After being charged with unnamed offenses, a narrator is condemned to death, where he faints and eventually wakes up in a pitch-black room.

After a few days of wandering in complete darkness, he discovers a seemingly bottomless pit in the middle of the room and nearly falls to death. After losing consciousness for a few days, he wakes up and finds himself strapped to a wooden frame. Above him, a picture of Father Time looms over him, holding a pendulum as it slowly descends toward the prisoner.

After making his escape, the prisoner nearly falls to his death when the cell walls start to heat and move inwards—pushing him to fall into the center where the pit is.

Other tales in the book include “The Cask of Amontillado,” “The Black Cat,” and more. If you’re a fan of classic horror, there’s no better place to start than to read Edgar Allan Poe for Halloween. The Tell-Tale Heart s& Other Tales is available on Amazon and several bookstores.