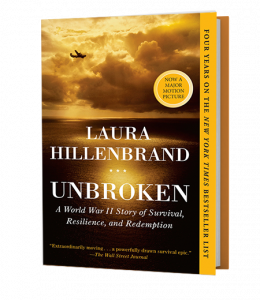 Every November 11, the United States celebrates Veterans Day to honor all US military veterans. This holiday differs from Memorial Day, which honors the ones who lost their lives during service. Thanks to the hard work of these brave men and women, American citizens continue to celebrate their freedom as a thriving nation.

One way to celebrate Veterans Day is to put aside some time to read their stories. With so many reads available, one Veterans Day book that particularly stood out is Laura Hillenbrand’s best-selling nonfiction book.

“Unbroken: A World War II Story of Survival, Resilience, and Redemption” chronicles the life of Louis Zamperini. Zamperini, who grew up in a strict Christian home, has worked to become an Olympic-class runner.

However, his running career soon ends with World War II breaking out. After enlisting in the United States Army Air Corps, he becomes a bombardier. After working with an unreliable plane in another mission, Louis and his crew crashed 850 miles south of Oahu. Days of drifting at sea have seriously damaged the remaining survivors physically and mentally. During this time, Louis vowed to God that he’d dedicate his life to him.

Before he could do so, however, he and his friend, Phil, were captured by the Japanese, and the two became prisoners of war. Separated, Louis must face the torment of his nation’s enemies alone.

Will Louis survive his time as a POW, or will he soon break?

Lauren Hillenbrand offers a no holds barred read. Unbroken the book broke records for being the fifth longest-running nonfiction best seller in The New York Times. Considering its powerful message on hope, survival, and forgiveness—it’s no mystery why it became a bestseller. In addition to these themes, the author utilizes her distinct writing style, keeping you on your toes from start to finish. If you are considering reading about the power of the human spirit, I highly recommend giving this book a shot.

In addition to the book breaking records, studios also made an Unbroken film adaptation in 2014. Directed by Angelina Jolie, the film was a critical success. A sequel also follows the first film but with a different actor and director. It also covers Louis’ life following his return from World War II and his struggles. You may find the film adaptations equally gripping if you don’t have time to read.