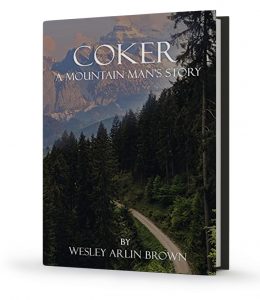 Coker: A Mountain Man’s Story by Wesley Arlin Brown is a gripping adventurous tale set in 1906. This is the story of Coker Owen Ford, who thrived all his life in the Wild West. He and his partner Rufe are living a quiet life in the wilderness of Aspen Hill.

Then, one day, a letter arrived for him from his daughter seeking help to save his grandchildren. Immediately, he leaves his mountain home and travels to Oklahoma to rescue them.

It was not an easy task, but he is determined. With his iron might and unshaken will, he embarks on an adventurous mission. Will he survive and rescue his grandchildren or perish?

Coker Owen Ford is a one-man army. He lives a calm life in his secluded cabin up on the hill. The wilderness has changed him over the years. He has merged his soul with the surrounding wilderness.

When that letter arrived, his whole life was changed suddenly. We get to know the sadness he hides from the outer world. What can we expect from a mountain man of seventy years old? Quite a lot, actually. He surprises us later in the story with his intelligence and determination. We will only know his true character when his journey comes to a full circle in the end.

The story is an expression of human emotions. Coker is a hard mountain man on the outside but he is full of compassion, love, and empathy. The author introduces this side of him as layer by layer. His love for the family is unshakable. He will go to a great extent to serve justice. Yet, he has the wisdom to find his own path.

The storytelling is pitch-perfect in this tale. Every scene is described in its minute details. Reading this story was like watching an adventurous movie on the screen. The added touch was in the dialogues. The local dialect blends with the story perfectly.

Overall, this is a fantastic adventure tale that will entertain and give a pleasant reading experience.

Wesley Arlin Brown, Greeley, Colorado, was born in New Mexico, a few yards from the dugout house described in the book. He has traveled over much of the wilderness areas in the southwest by horse, mule or foot. He received his bachelor’s degree from Eastern New Mexico University, did graduate work at Redlands University, received his master’s degree from Western State College and his doctorate from the University of Northern Colorado. He spent thirteen years teaching in public schools of California and Colorado. He later taught literature, philosophy, ethics semantics and humanities at Aims College where he was given the title of professor emeritus. Among other things, he has been a farmer, miner, a tank driver in the U. S. Army, and a U.S. Forest Service employee.