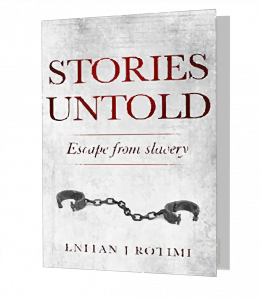 “Stories Untold: Escape from Slavery” is a tale of survival, escape from slavery, and how love conquers all. Writer Enitan J. Rotimi spins a compelling story set in West Africa in 1809.

The story starts with a few delegates from the Wagombe tribe. The Wagombe is a pastoral tribe that relies on agriculture and cattle raising for their livelihood. The delegates arrive at the Kapora kingdom, where they seek protection under the powerful King Zaki.

To ensure protection, the Wagombe must agree to become a vassal state. To become a vassal state, leaders of less powerful kingdoms and tribes must surrender their status as sovereign Kings to take on the role of vassal chief. Each state must also pay an annual tribute to the Kapora kingdom for continuous protection and prosperity.

During this exchange, Crown Prince Macati of the Kapora noticed the beautiful Princess Awat of the Wagombe. As sparks fly between the two teens, so does their relationship, which eventually blossoms into a long-term engagement.

Nyoka, King Zaki’s wicked yet beautiful second wife, refuses to let Macati become the next ruler. After finding out that her son, Ika, will be passed on as king, she devises a plan to ensure that Macati’s reign and legacy as king will not bear fruit.

Through the connections of her pathetic relative, Buta, Nyoka devises a sinister coup that will ensure Ika becomes king. Using Buta’s business relations with Pombeiros—slave traders from Portugal, Nyoka ensures that Macati will be sent on a slave ship heading for Brazil. In contrast, his beloved Awit is sent to the United States. King Zaki dies after unsuccessfully trying to save Macati. With Zaki dead and Ika as king, Nyoka will finally have her way as the true power behind the throne.

Will Macati rise to the occasion and return to his kingdom? Or will he fail to live up to his destiny?

Exciting, romantic, and compelling, “Stories Untold: Escape from Slavery” is a beautifully woven tale that deals with many relatable themes. With an array of interesting characters and fascinating world-building, the author does an excellent job of fleshing out his characters and the plot.

One of my favorite parts of this story is how Macati grows from a playful boy to a responsible man. With so many obstacles in his path, his journey from a bounded prince to a righteous king is incredibly inspiring.

If you’re looking for a book with great characters, exciting adventures, and an unforgettable love story, then “Stories Untold: Escape from Slavery” is a must-have.

Purchase the e-book and paperback on Amazon.