The Legends of Volcano Island 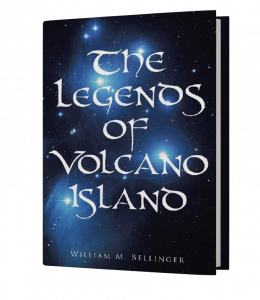 Sometime in the early 1820s, two young Polynesian friends named Maia and Taygeto found a map in a glass bottle. This map washed up on shore after a typhoon hit the island. After realizing this was a treasure map of Olosega Island, also known as “Volcano Island,” the two twelve-year-olds prepared a raft. After a few days, they sailed across from their home island of Ofu.

The island of Olosega is teeming with various plants and animals but has zero villagers. As the two followed their found treasure map, they discovered a cave with a treasure chest and several artworks and artifacts gracing the cave walls.

Eventually, the two brought the chest back to the beach. After building a fire on the shore, they were rescued by their fellow Ofu islanders and relatives. As they present their findings to the village elders, the two find that their discovery has led to their islands’ incredible legends and historical events.

Fate had brought Maia and Taygeto together. However, their time together will not last. As they grew older, so did the various circumstances that surrounded them. While Taygeto eventually went to the United States to take a teaching opportunity, Maia stayed behind. She watched as her homeland became open to English explorers and foreign trade.

Nevertheless, destiny is not finished with the two. As the years passed, their mutual love and feelings for each other did not. After a devastating typhoon that wiped out the homes of many, Maia and Taygeto learned of their shared tragedy when their respective spouses passed away; as they comforted and cared for each other, they eventually realized they were always meant to be together.

In addition to finally being united as man and wife, the two know they must return to Volcano Island to explore other areas within the cave. What will they find once they arrive and have foreign influence changed the island forever?

William M. Bellinger writes a fascinating tale about growing up and preserving one’s heritage. As the Polynesian islands eventually became known as the American Samoa islands, the way Maia and Taygeto handled the changes within their hometown was realistic and optimistic. While we can’t erase “progress,” we can find ways to ensure that future generations will never forget our past.

Overall, “The Legends of Volcano Island” was a fun read. The book is well-written and made for readers of all ages. Suppose you are thinking of reading the history and legend of Pacific islands. In that case, this book is a superb option.